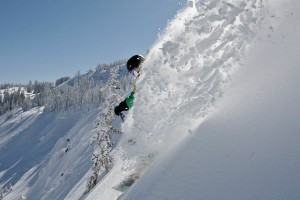 One of the many times that I realize I need to find a way to be involved in freeskiing for as long as I can.

Getting to ski a lot, and have it as part of a job and everyday life is very important to many people, and being a ski representative can help accomplish this.  Matt gets to ski about 35 plus days a year, which isn’t too bad.  Plus, if you truly love the ski industry it is just amazing to be surrounded by the world of skiing all year long.

As a ski representative it is important to be updated on the world of skiing, and Matt does this through reading several different types of publications. Some publications that Matt reads and views on a regular basis are MSNBC, Fox News, Outdoor Business, Sports Job Source, SIA Emails, Malakye, Skiing Business + others. It was really cool to find out that there is a skiing and outdoor business magazines, and I will definitely start reading these even if I do not become a ski representative.

Matt still has 90% of the same passion for the ski industry as he started which is really strong after being in the business for a decade.  This is very impressive because there are not many jobs out there where people say they still have this much passion after so many years in an industry.

A huge success factor for Matt is frequently networking.  He says this helps a lot, and also lets you get heard more by headquarters if you have an idea or need something.  If a ski representative for Line has an idea that makes financial sense, it will be listened too by corporate.  He also says that he likes working for a bigger corporation than a smaller and new independent company because they have a stronger management group and there is more job security than smaller companies.  This is important to know because I was looking at the benefits of the options for both a small and a large ski company.  I originally thought it would be more satisfying to work for a small independent company, but now I think it might be better to work for a large organization.

The most satisfying job for Matt is selling gear.  He gets paid on commission 90% so if he sells he gets paid; if not then he makes no money so he gets to control his own destiny.  I did not realize that so much of his pay was commission based, and it is impressive and cool that he gets to control his own destiny like that.  Matt travels locally and all the way down to Arizona for different ski and trade shows to sell his gear.